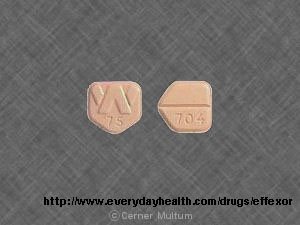 What is Effexor?
Effexor is the brand name of antidepressant venlafaxine belonging to the selective serotonin and norepinephrine reuptake inhibitors (SSNRI) that allows the neurotransmitters serotonin and norepinephrine to slow down and build up enabling the body’s neurons to fire properly. The lack of these neurotransmitters affects the ability of the neurons to work properly which is one of the causes of depression. The effect of this drug on the transmitters depends on the dosage, with small doses working only on serotonin.
A lack of serotonin at low levels can cause bulimia and panic but at even lower levels will lead to OCD and depression.
What are side effects of drugs such as Effexor?
The most common side effects, loss of sleep, appetite and weight are not serious and diminish quickly.  However there are more moderate scale there are side effects such as drowsiness, fatigue, nausea and sexual dysfunction.
On a more serious scale, the FDA issued a “black box warning” about a suicide risk while taking this drug. While this link has not been proven among the normal population, it may exacerbate conditions for those that already have a suicide risk.
Additionally, SSNRI drugs cultivate dependency which may lead to a discontinuation syndrome. Effexor was a high risk of this due to a “short half-life” which caused patients to experience withdrawal symptoms as early as three days after starting treatment. Doctors frequently have to prescribe smaller doses of SSRI drugs to suppress the effects of discontinuation syndrome. Dependency on anti-depressant medication is gradually gaining acceptance as a serious issue, although many doctors prescribing the drugs may not be initially aware of the potential dangers of putting patients on Effexor.
What is serotonin toxicity?
Too much serotonin in the body is harmful to one’s health. Serotonin toxicity can result as result of mixing SSRI medication with other drugs. The increase of serotonin can initially cause anxiety, insomnia, sexual dysfunction and gastrointestinal disturbances. At higher levels, there is the risk of “serotonin syndrome” which causes fever, tremors, coma, seizures and death. At the higher levels of serotonin toxicity there may also be heart damage, but this link has not yet been proven.
What are the potential effects on pregnant women?
The FDA has issued a blanket warning against the use of anti-depressants in the third trimester of pregnancy as there is an elevated risk of birth defects on the fetus. There is also an elevated chance of a miscarriage while taking Effexor for pregnant women.
What should I do if have been improperly prescribed Effexor?
If you can prove that your doctor was negligent in prescribing you Effexor, you may be entitled to damages for medical expenses, lost wages and emotional anguish. It is the doctor’s responsibility to ascertain health risks before prescribing medication, so allowing the patient to take drug combinations that lead to serotonin syndrome or prescribing Effexor to pregnant women are some examples of how a doctor can be negligent in this case.

How does Alli Work