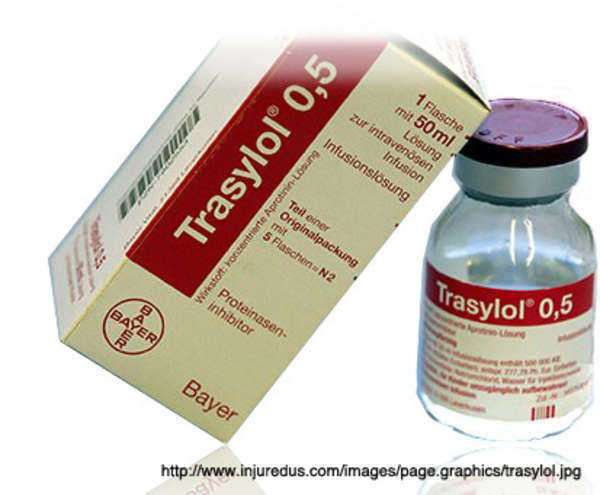 What is Trasylol?
Trasylol is a drug developed and manufactured by Bayer Pharmaceuticals for use in surgery to prevent bleeding. The generic term, aprotinin, is categorized as a basic pancreatic trypsin inhibitor (BPTI). Trasylol works by slowing down the effects of the fibrinolysis, which is the process by which blood clots begin to break down. The goal of Trasylol was to prevent low blood pressure and lower the need for blood transfusion during heart and liver surgeries. In 2008 the drug was taken of the market after reports began to surface that it was linked to complications and death in patients who were exposed to it.
Side effects
Trasylol has been linked to acute renal failure, myocardial infarction, heart failure, stroke encephalopathy in patients that were injected with the drug. In 2006 the FDA received notice that there were increased risks associated with the use of the drug during surgery but neglected to institute a warning. Subsequent studies in 2008 have shown that the drug, when compared to similar fibrinolysis inhibitors, was 32% to 64% more likely to result in mortality.
Government Regulation
Canada has recently permitted the reintroduction of Trasylol back onto the Canadian market. Those involved stated that when Trasylol is used as directed it is perfectly appropriate and the benefits greatly outweigh the risks. The statements, given by Health Canada, went on to say that Trasylol is intended for use in low risk cardiac bypass surgery but that it became widespread in use for all surgeries and that complications most likely occur with higher risk surgeries. As of this moment the ban in the United States is still active.
Litigation
As of 2007 Bayer had reached settlement with 200 of 2,000 pending cases involving Trasylol and complications leading to kidney failure, heart conditions and death. The average settlement is believed to be between $400,000 and $500,000. Of the 1,600 claims still pending most claim that the Bayer did not properly advise the healthcare community and users of the risks of Trasylol and its relation to serious injury or death. The complaints also allege that Bayer delayed disclosing those results to the FDA and failed to make an adequate warning or recall when it was appropriate.
What to do if you have been exposed to Trasylol?
It is most often found that those who go in for surgery do not know of the medications involved. If you or someone you know is suffering from a kidney or heart condition it is important to consult your physician to discover whether Trasylol was involved in your surgical proceeding. Litigation over Trasylol is ongoing but it is important that you go through the steps necessary to discover if you have a claim. The statute of limitations is running and in these kinds of cases it is often difficult to pinpoint when an individual should have known they were injured. For that reason, if you were exposed to Trasylol it is important that you consult with an attorney specializing in injury cases of this nature.