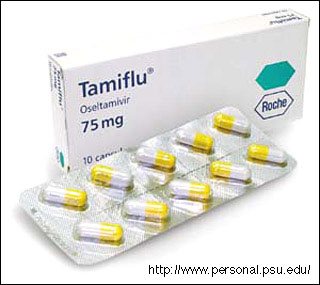 What is Tamiflu?
Tamiflu, or Oseltamivir is an anti-viral drug developed and manufactured by Roche for the treatment of influenza. The drug works by inhibiting an enzyme found in host cells. That inhibition acts to prevent the release of new particles of the influenza virus from being released by the infected host cell. The drug is approved for use by individuals one year old and over.
Side effects
Common side effects of Tamiflu include nausea, diarrhea, abdominal pain, and headache. The rarer and more severe side effects associated with the drug include hepatitis, rash anaphylaxis and Stevens-Johnson syndrome.
One disastrous side effect associated with Tamiflu are neuropsychiatric disorders associated with hallucinations and attempts to hurt oneself and cause harm to others. In 2007 Japan's health ministry issued a warning about use by individuals between the ages of 10 and 19 after a number of incidents involving teenagers jumping from tall buildings after taking the drug. A study done by the health ministry later confirmed that teenagers who take Tamiflu are 54% more likely to exhibit abnormal behavior; including hallucinations, than those who did not take the drug.
Government Regulations
Between 2005 and 2006 the FDA received 103 reports, mostly Japanese, that indicated a higher risk of hallucinations than previously expected. Due to this the FDA required a label change on Tamiflu packets indicating the possible side effects could include hallucinations, delirium and other unusual behaviors. In its defense Roche has commented that of the massive amount of people who get influenza every year it is more likely that the flu itself is responsible for the hallucinations, not Tamiflu. Roche has recently lowered the recommended dosage of Tamiflu in half, from 12mg/ml to 6mg/ml, due in part to FDA reports.
Litigation
If you or someone you know has taken Tamiflu and displayed adverse reactions including hallucinations and other abnormal behaviors you should stop the drug immediately. If you have been injured do to actions taken while on Tamiflu or you have suffered severe side effects including Stevens Johnson disease then you should consult an attorney about possible legal action against Roche. In an injury action it could be determined that Roche should have known that a high dose of Tamiflu might lead to adverse reactions. The recent decrease in dosage is circumstantial evidence of this.

A Guide to Heroin Charges in the United States