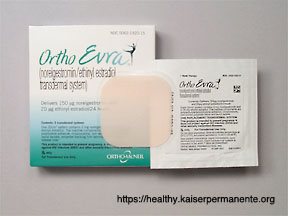 What is the Ortho Evra patch?

Manufactured by Ortho McNeil Pharmaceuticals, the Ortho Evra is a skin patch that possesses the same hormones as several birth control pills. Women may wear the Ortho Evra patch on the abdomen, upper torso (aside from the breasts), the buttocks or the outer region of the upper arm. The patch, which is 99% effective, is used to prevent pregnancy by delivering estrogen and progestin into the blood stream through the skin. The Ortho Evra patch does not prevent the transmission of sexually transmitted diseases, including HIV.

Side effects of the Ortho Evra patch include breast tenderness, headache, rash at the site of the patch, nausea, and menstrual cramps.  The most serious of these side effects is fatal thromboembolic events.  This risk is increased greatly in women over 35 years old who are also smokers.

Due to the increased risk of cardiovascular conditions associated with users who are smokers Ortho-Evra inserted a warning stating that "Women who use hormonal contraceptives, including Ortho Evra, should be strongly advised not to smoke."  In 2005 Ortho McNeil, with the FDA, revised the label to warn women about higher exposure to estrogen if they use hormonal patches instead of daily birth control pills.  Increased estrogen has shown to increase the likelihood of cardiovascular disorders.  The label was revised twice more in subsequent years.

There have been a number of lawsuits against Ortho McNeil and Johnson & Johnson over the safety of the Ortho Evra patch.  The lawsuits revolve around a series of cardiovascular conditions resulting from the use of the patch.  In 2008 Johnson & Johnson settled lawsuits totaling $68.7 million. These suits were filed by hundreds of plaintiffs who suffered blood clots, heart attacks and strokes as a result of using the patch.

Ortho McNeil Pharmaceuticals–and its parent company Johnson & Johnson–is currently facing a class action lawsuit over problems associated with the Ortho Evra patch.  Many women's health organizations have called for the recall of the product.

What if I have used the Ortho Evra patch?

Given the aftereffects associated with the product, if you have used the patch and are facing cardiovascular problems, you should consult a medical professional. Your problems may be directly associated with using the patch. Moreover, it is in your best interest to seek legal advice.  You should consult a class action attorney as soon as possible.  The class action suits involving Ortho Evra are in the planning stages and it is beneficial to get involved.

Facts on Stimulants as Controls Substances