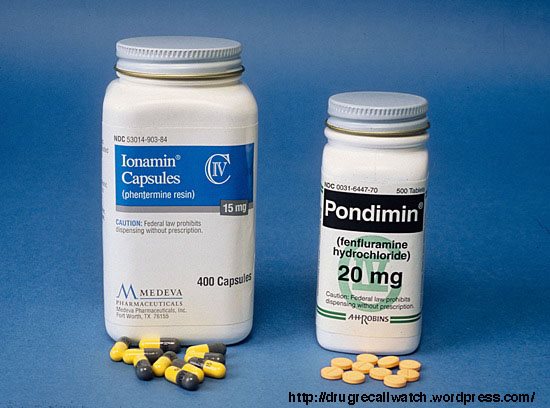 What is Fen-Phen?
Fen-Phen is a drug combination that consists of fenfluramine and pherntermine and was used to treat obesity. It has since been withdrawn from the market. At first, the drug was found to be useful against obesity and hailed as a “diet miracle”, although patients were found to relapse after stopping treatment. Eventually the drug was found largely ineffective at helping weight loss, only improving the mood of the patient and increasing dependency on a mood altering medication.
How does Fen-Phen work?
Fenfluramine releases more serotonin into the body, tricking the body into feeling full. The downside is that the increase in serotonin has cause psychotic episodes and other undesirable mental disorders. Adding pherntermine to the fenfluramine was thought to counteract the harmful psychological effects of serotonin imbalance and this drug combination was done “off label” or unapproved by the Food and Drug Administration. Fen-Phen was intended to affect the serotonin receptor that made the patient feel full, but it also stimulated another receptor that led to problems with the heart. This is known as neurotoxcity and was unaccounted for in studies about the affect Fen-Phen has on the body.
What are the risks associated with taking Fen-Phen?
There were early indications that fenfluramine caused pulmonary hypertension or the thickening of the lungs that in turn affects proper breathing. Nonetheless, a variation of the drug, brand named Redux was approved and sold to American consumers until the FDA announced its withdrawal in 1997. There were additional concerns about the effect of the drug on heart valves with as many as 66 cases of disease in patients that had been taking fenfluramine and its variants.
What has been the liability, assessed to date?
Wyeth pharmaceuticals (now owned by Pfizer), the distributor of fenfluramine and Redux has an estimated liability of 14 billion owed to individuals that have suffered from taking Fen-Phen. There has been dispute as to the amount of individuals affected by cardiac distress by this drug with some estimates ranging as high as thirty percent. Studies have shown that individuals that have taken this drug for more than two years have a 17% increased chance of developing heart valve disease.
What should I do if I have been negatively impacted by this drug?
An electrocardiogram from a licensed healthcare provider is essential to failing a claim for your share of the settlement. Disbursement of compensation had slowed after falsified or misleading electrocardiograms were submitted for claims by doctors that were paid by law firms. An attorney can better help you determine if you are eligible for damages due to medical expenses, loss of wages and pain and anguish.